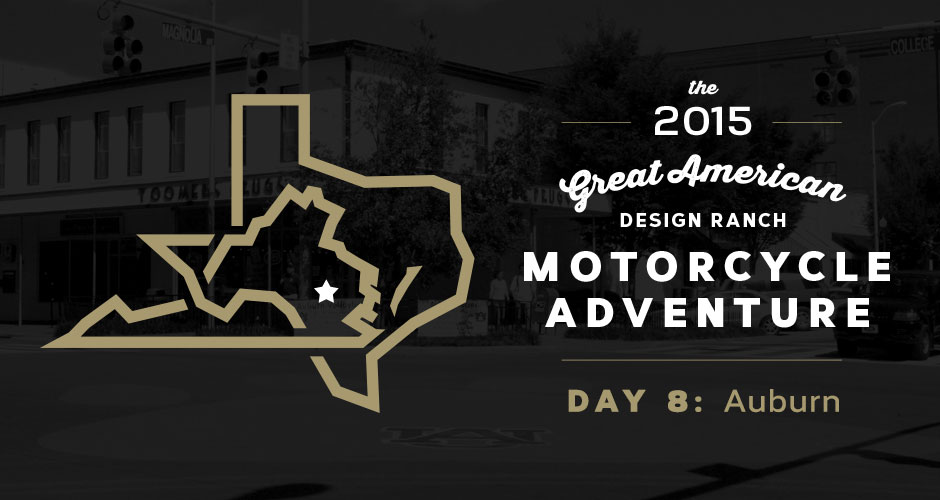 I wake up surprised to see that Neal’s house still without power. But, luckily, my now depleted backup charger has my iPhone at 100%, even if I’m not quite at that point myself. I’m still feeling all the late nights on the Ranch. I fear I may be getting old.

After cleaning up, packing up and loading up, I part ways with Neal and do my best to adequately express how grateful I am for his hospitality and kindness during my trip. I was on the fence about CouchSurfing, but getting to know Neal and his friends was such a pleasant surprise that really added to my experience.

Much like yesterday, my 600 mile trip to Auburn, Alabama is somewhat uneventful. The weather is great and the traffic situation is smooth. I also really enjoy the interesting geography around the gulf. All the bridges, water and wide-open skies make for a fun, interesting ride. At least as interesting as 10+ hours on the interstate can be. It’s quite nice to see this leg of the trip during a dry, sun-bathed ride. Quite the opposite from when I came through these states several days ago going the other way.

As I press on, there are a handful of interesting interactions and observances throughout the day:

Without encountering any other crazies, I reach Auburn around 7:30. I’ve never been to this part of the state so I’m interested to find my intestate exit fairly empty. I drive around for a while heading toward the address of my CoughSurfing host, Corey, fearing I may be lost since I don’t see much of anything. Definitely nothing resembling a college town.

The downtown areas seems to pop up out of nowhere and I find myself outside of Corey’s place before I knew it. We exchange some texts and it turns out he and some friends are in town grabbing dinner at Cheeburger Cheeburger. He kindly invites me to join them, so I head over to do just that.

The downtown area is pretty charming, hidden spot and I get the impression I’d enjoy exploring the area if I had more time. After catching up with Amanda for a while, I head in and meet Corey and a few of his friends from his campus ministry group. When I say a few, what I really mean is that the entirety of Cheeburger Cheeburger is filled with people from his group. Aside from one elderly couple, Corey knows every soul in the place.

Just like Neal and his friends in Beaumont, Corey and his crew are very warm and welcoming. I have a good time getting to know them, and the burger & shake aren’t too shabby either.

After heading back to Corey’s and getting an overview on my accommodations, we chat a bit more about music and art before turning in.

Instead of catching up on some sleep, I opened up my laptop to do a little work. As I’m checking emails and project statuses, my iMessages sync up. The odd text that Stephanie sent Friday night about getting home safe appeared, along with a couple more. It turns out that she texted me by mistake because she had previously sent a message from the GRADE show telling my that my logo design for Zero Waste Solutions won an award for Best Logo. This is my first GRADE award, so I’m pretty happy to get that news.

After chipping away a bit more on my workload, I call it a night. Tomorrow I see my family.