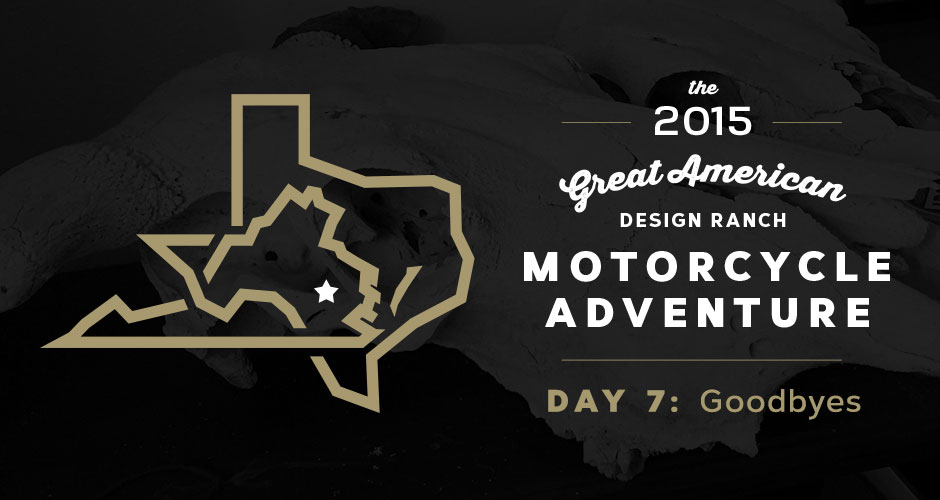 Oof. It is not fun waking up today. Not only do I have to pack up, part with all my buds and hit the road, but we made a pretty late night of it again last night.

I stumble down to breakfast to stuff my face, grab a few pics with friends and start dealing out goodbyes. Draplin is wheeling and dealing, taking full advantage of any last minute opportunities to move some merch and head home with a lighter load. Last night when I handed my shirt over to have his Texas heart design screen printed on it, it somehow came back as a completely different size (women’s L). I was pretty gutted. I love Texas and Draplin so this design was perfect. Welp, now it’s Amanda’s. It was this unfortunate apparel mishap that made me pounce on the chance to get another Draplin tee when he had the merch out again today. So, I left with a nice, perfectly-fitting, Get Cosmic torso cover.

The shirt that almost was

I always hate Sundays on the Ranch. In 2013 everybody seemed to disappear at once and I was literally the last person to leave. The AIGA U-Haul rolled out and I was still saying adios and thanking the tremendous Waldemar staff.

This year things were a bit more laid back. I saw plenty of friends before they set off, even if we didn’t get to have a mushy, tear-jerking, goodbye (looking at you, KS). The sun was out and everybody didn’t seem to be in as big of a hurry to roll out. The awesome folks at Waldemar were cool with me riding the bike through camp again to load up, which made life so much easier. After stuffing all my belongings back into a single bag, I was ready bid farewell to Oen & Flip, the best roommates a fella could ask for.

David and Jolinda are getting shuttled back to San Antonio, but their ride will be a while, so I hang out with them and new buddy Bailey until they’re whisked away to the airport. I was pretty much set to hit the road, but I wanted to check on my Austin buddies Jessica (who I met in 2013) and Jenn (who quickly became a good friend this year), but their place was empty. Feeling that I was about to overstay my welcome like in 2013, I decide to hit the road. As I crank the bike and drop on my helmet Jessica & Jenn, who were enjoying the river, appear and I get one more solid farewell in the books before i have to hit the road. Those two are loads of fun and a lovely way to punctuate this year’s Design Ranch experience.

I’m heading to Beaumont straight from Hunt so I’ll be going a new route through San Antonio. In 2013, my first night leaving the Ranch was spent in a cheap hotel in Lafayette, LA and it was one of the more depressing experiences of my life. I was still so far away from my family, but I had also just left all these great friends, for what? To sit alone in a crap, soulless room in sight of the interstate. This year, my first night on the trip back will be with Neal again. I think staying with a familiar face in a familiar space will help dull the sting that leaving the Ranch can cause.

On the Road Again

The rest of the trek to Beaumont is fairly uneventful. I wanted to try to stop in Houston on the way through to meet up with Carlos Fernandez, a tremendous designer/illustrator whose work I really admire, but the timing didn’t work out on my end. Next time, Carlos! I also have an uncle in Houston, and it would have been great to drop in on him, but again, timing wasn’t on my side.

All that aside, the day is pretty smooth. I’m blessed with clear skies and open roads. I get into Beaumont around 7:30 and stop to fuel up. Neal texts and says that he and some friends are close by at a bar called Luke’s and invite me out for a drink. While I’m fueling up, Amanda calls and I get to catch up with the fam before heading over to meet Neal and his friends. So far, this evening is shaping up much better than in 2013.

After some quality telephone lovey-dovey with Amanda, I head over to Luke’s. I spot Neal sitting outside surrounded by more fit, beautiful people. I’m introduced to his friends, fellow Crossfit trainers. I cannot believe how accepting and cool they are. Here I am, this strange couch-surfing drifter guy, covered in interstate grit and splattered bugs, and they’re roll me into the conversation like an old friend. This is a great crew.

Helluva host. Go see Neal and let him whip you into shape if you’re in Beaumont.

We continue to shoot the breeze as the weather threatens to turn nasty. We relocate inside and I go move my bike under some shelter. We’re eventually joined by more impressive Crossfit specimens and we fill up the table. The conversations become even more boisterous and jovial. This is such a positive, fun group. And nobody seems to have a problem with me just shoehorning my way into the fun.

Eventually it’s time to wrap it up and head back to Neal’s. He’s looking forward to watching Game of Thrones, and honestly I’m excited to see my first episode. The weather has really turned and there’s a nasty storm rolling through. On the ride over to Neal’s I’m being windblown all over the road and it’s not a very fun ride. But we make it back to Neal’s to find his whole neighborhood without power.

We hang out for a bit in the dark hoping that the house comes back to life, but we eventually surrender to the night and turn in for bed. Luckily, my portable charger is juiced up so my phone/alarm/life-force won’t die overnight. I hope.