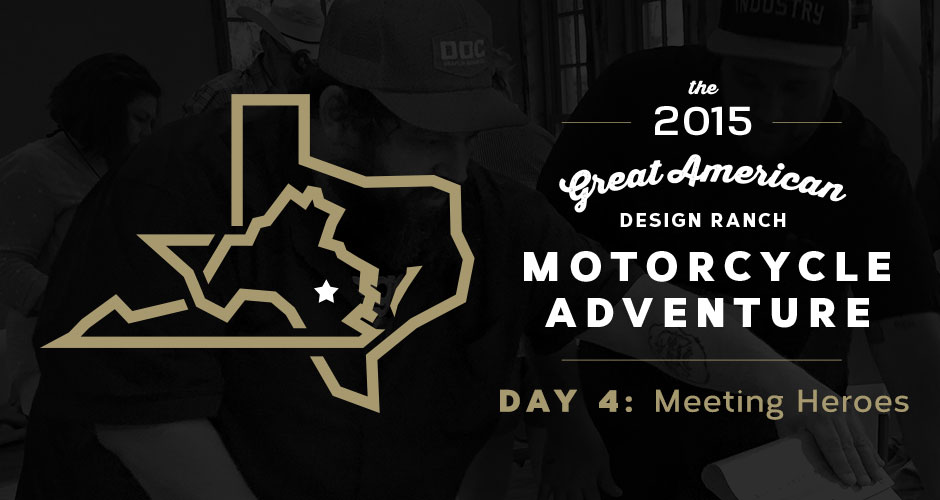 I’m up around 7:00AM. The trip to Camp Waldemar should only take about 3 hours, but I’m planning on it taking 4, since I’ll have fuel and supply stops. Registration/Check-in begins at 11:00 and my first workshop starts at 2:30. In 2013, it took me longer to get to the ranch and I missed the start of my first workshop with Jay B. This year, my first workshop is with Aaron Draplin. I will not be late.

I first saw/heard of Aaron Draplin through this video, which made waves a while back. At the 2011 Design Ranch, I won Draplin’s Pretty Much Everything Poster (2009) at the silent auction. For the past few years, it’s hung in the hallway outside my office and I rarely pass it (which is often) without stopping to tumble down the rabbit hole a little bit. When my oldest son, Lewis, was growing up and just started identifying things, I’d hold him up and we’d pick out all the Garys (Draplin’s dog) or other little boy things like power tools or cars/trucks. But he really liked the Garys. Since then I’ve caught several of Drap’s talks/videos online and have a great respect for what he values and the design company he’s built (not to mention mutha lovin’ FIELD NOTES!). He’s a bit of a design sentimentalist as am I, appreciating the simpler, bolder, effective design of yesteryear. He has a strong focus on logo design, my favorite form of design. He’s built an empire of invented merch and awesome design products, a constant goal of mine since starting my company in 2008 (despite zero movement on my part to make it happen). We both loved our dads dearly.

Long story short, he’s a bit of a hero of mine and I’ve been looking forward to hopefully meeting him for years. I will not be late to his workshop.

Landing at the Ranch

The drive from Austin to Hunt is fun & beautiful. Despite some seriously ominous clouds along the way, I stay dry and make good time. I even have time to check in with Amanda at my supply stop at Kerville, 30 minutes outside of the ranch, since service at Waldemar is nearly non-existent. After half an hour of great scenery and leaning into curves, I’m pulling up at Camp Waldemar around noon. In 2013, Grace was the Design Ranch Director and met me in the parking lot/field as I was getting off the bike. It was a great surprise considering how busy I know the Director stays each year, and an awesome way to kick off Design Ranch.

The field isn’t packed with cars this year. I’m a bit early, but I have a feeling I’ll see lots of old friends soon enough.

I’ve called ahead to see, but as I check in with the Camp Waldemar staff, I follow up about some sort of cover to park the bike under since I know we’re in for some nasty weather. I’d rather it not be in a wide open (flood-prone) field for 3 days with so much rain on the way. They tell me that after I ride up to the cabin to unload, I can park under a nearby shed.

Usually people (who are so inclined) and their luggage are escorted to their cabin on golf carts. I double and triple-check that it’s kosher for me to drive my motorcycle through the ranch and unload at my cabin, which just so happens to be all the way at the other end of the ranch. The lovely ladies of the Waldemar staff confirm that it’s OK and before they can re-consider the safety issues, I’m back on the bike and cruising past fellow ranchers on the way to my cabin. I don’t know where this activity falls on the jackass to badass spectrum, but I don’t care much since it makes unloading easier.

At 12:30PM, I’m unpacked, and somewhat settled. I’m the first of my bunkmates to arrive. I’m bunking with Oen & Flip from Austin again, and our fourth is fellow RVA’er, and all-around awesome guy, David. After some grub and catching up with Austin roomies and other old, dear friends (Kelly & Judy! – who both deserve an entire post dedicated to them), it’s time for my first workshop with the man himself.

I’m a bit nervous before I walk in for Draplin’s session, but he’s so down-to-earth and friendly that you forget you were a bit star-struck seconds earlier. We’re going to be constructing Field Notes from scratch in the same way that he made his first 1,000 books. We trim down cover stock, screen print the design, collate the text pages, saddle-stitch it all together, trim the books down to the finished size, then finally round the corners.

Draplin’s got this idea that our group should try to assemble 50-100 books that he’d sell as a limited edition set, with proceeds going to a charity of our choice. Then, if we have time, we can make as many as we want for ourselves. We all have fun, but work diligently to meet our quota. We get 50 books done, all assembled and signed by everybody in the group. Everybody also seems to have time to make several books for themselves.

The colorful fruits of our labor

Before we know it, our workshop time is up and people start to head out. It’s only the first day. I know I’ll see more of Draplin this weekend, but I’ve brought him some junkin’ goodies that I want to pass along. He lights up a bit at what I’ve brought, which is totally cool. To share this geek out moment with one of my heroes. Hot damn, Design Ranch is where the best experiences happen. (Like two-stepping with Jessica Hische and Anna Bond! What what.) Before I’m done sharing my design finds, Draplin hands me a shuttle patch as a thank you. So I hand him the patch I brought him that was found while going through my dad’s old hat collection. I tell him my story about Lewis pointing out all the Garys on his poster. He quickly rolls up an updated version of the Pretty Much Everything poster and quietly passes it to me. “Take it, man” I try to refuse, but he’s a convincing guy. I see others waiting for time with the man and I don’t want to overstay my welcome. I’m so grateful and impressed with this guy that I thank him profusely and practically run away. Half way back to my cabin I realize that I didn’t buy any of the other merch items from him that I wanted to get. I didn’t get a picture with the big lug! Argh. Looks like I’ll be dropping in on him again at some point this weekend.

They’re big & bright. Deep in the heart. Of Texas.

The rest of the evening consists of more good food, welcoming announcements, and lots and lots of catching up with old friends and making many new ones. I get to catch up with David & Jolinda and hear how their trip to Texas has been compared to mine. The immediate connections and friendships at Design Ranch is one of the main reasons I keep going back. It’s so easy to talk to everybody there. Hearing their stories and what they’re working on is so motivating and inspiring. The weather is kind to us, so we’re enjoying our drinks and making s’mores under the big, starry Texas sky until late.

Heck of a first day at the Ranch.