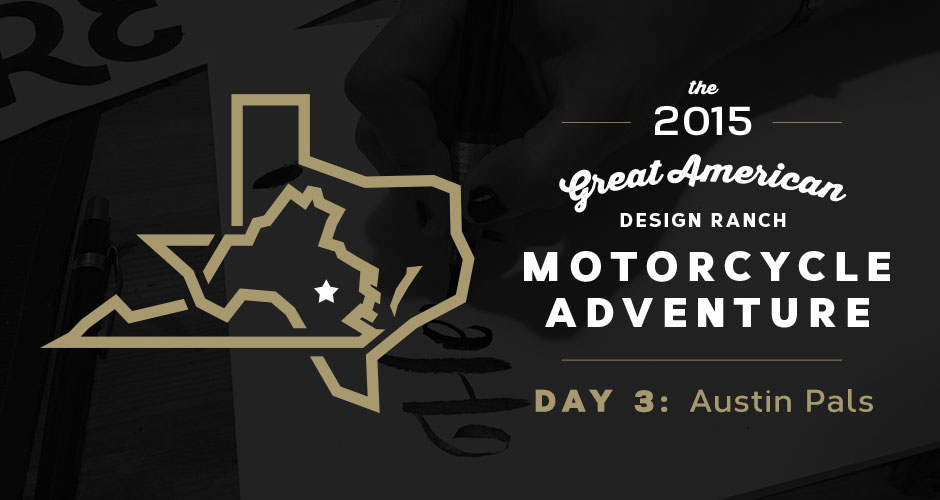 I’m loading up the bike when Neal heads out, presumably to whip his fellow Texans into shape. I’m not expecting any rain, but after the past 2 days I’m not taking any chances and I drop my pack into a waterproof bag before strapping it to the sissy bar.

I left my helmet and gloves in the garage overnight next to the bike. This turns out to be a mistake. After cranking the bike and putting on my helmet & gloves, I notice my gloves are covered in tiny brown spiders. Crap.

Wait a sec, my gloves were in my helmet all night. The helmet I’m currently wearing. Double crap.

After what I imagine is quite an entertaining performance for Neal’s neighbors, I’m quickly out of my helmet & gloves and they seem to now be arachnid-free.

After gearing back up, I notice my bike (which is still running) has a loose radiator hose and is leaking coolant. Sigh. Helmet and gloves back off.

I’ve got plenty of tools packed, so tightening the hose and topping off the fluid is a fairly quick endeavor. Gear up. Again.

I’m finally hitting the road sometime well after 9:00AM. As soon as I leave Neal’s driveway, I know I won’t be riding long. I’ve loaded up my bag backwards and the hard side (the side of the bag with my flip flops, sketchbook, flask and other generally firm & uncomfortable items) is against my back instead of against the sissy bar. I’ve got a nearly-full tank of gas and I have no desire to ride over an hour with a sketchbook corner in my kidney. I don’t care how beautifully rounded it is.

I stop at a gas station to remedy my lumbar luggage situation before hopping on the interstate. At this point, I’ve met my daily quota for putting on and taking off my helmet & gloves, and I haven’t even started the day’s travel.

I’ve only got about 4 hours of travel today, so the early delays aren’t a big deal. The rest of the day is sunny and smooth and I arrive in Austin around 2:30PM.

I’ve booked an AirBNB rental with Leeza, a fellow creative. She’s at Zilker park for the afternoon, so I let myself in and unwind a bit. I’ve got a headache and I’m more tired that I should be. Today was only a half-day. Maybe I watched too much AMC with Neal. Maybe the sunny day got me a bit dehydrated. Then I start to worry a bit. Have I sufficiently taken care of myself today? I hope I’m not headed for a physical shut down. I flashback to 2013 post-Design Ranch:

I’ve left Camp Waldemar for Austin where I’m planning to spend the night with buds Grace (from 2009 Design Ranch fame) and Chris. After only a few hours of riding, I arrive in Austin weak and with a headache. I search out some food and run into a few gals from Reno that I had just met at Design Ranch. We pal around a bit on South Congress until we land at Doc’s for a drink.

I hang out until the sights & sights of busy SOCO are too much for my splitting head. I’ve made dinner plans with another good pal, Kelly, but I’m not feeling too great when I arrive at her place. My memory of the night gets fuzzier at this point.

We pick a place and head out to grab a bite. I’m sure I’m apologizing profusely for my pitiful physical state. At least I hope I am. I vaguely remember having a good chat with Kelly about some of her past travels. I also remember my old college bud, Jeff, and former client, Paul, randomly materializing at the table next to us. I don’t think I eat much.

I don’t remember much else, but I apparently tried to drive to a hotel or something after dinner, but Kelly found me slumped over on my gas tank, asleep on the bike in front of her house.

She made sure I was set up for the night and that I didn’t make any more potentially life-threatening decisions. God bless great friends.

Needless to say, I don’t want another physical & mental shutdown this year. Luckily, some quiet downtime and a power nap have got me feeling much better.

I text a couple of friends that I know won’t be attending Design Ranch and head out.

I land at Jo’s to meet up with Hollie, a friend I met at Design Ranch ’11 when we bonded over the difficulties of leaving our toddlers at home for the weekend. Stories, baby pics, the whole 9.

Moving vehicles & panoramas don’t mix! The bike on the far right belongs to the gentleman I meet.

As I’m waiting, a gentleman seated next to me gets up and takes a picture of his motorcycle that was parked in front of Jo’s. I tell him he’s got a nice-looking ride, and he asks if I’m riding as well. He’s very nice, but also quite solemn. When I tell him I’ve ridden in from Virginia, he tells me, “Be safe” and his words are heavy with sincerity.

Two weeks ago, he lost his wife in a motorcycle accident. He shows me images of her & her bike, them together, the crash site. The picture I saw him take earlier was about to go online with the caption “My bike is lonely sitting here without her.”

Oof. Reality check right to the heart. I didn’t necessarily need a reminder or what’s on the line everytime I hit the road, but here it was. A very real picture of how precious and fleeting life is. How vulnerable motorcyclists are. How one decision, one turn can change everything. I can’t imagine his pain.

My mind is heavy when Hollie and her boys arrive. I pass along some final condolences and encouragement to the gentleman as we head up the road to Home Slice.

It’s great seeing Hollie again. Her boys are very close in age to mine, so I get to do all the parenting things I’ve missed out on over the last few days. Wipe noses, hold babies, remove rocks from mouths, match wits with a 5-year-old.

When we get to Home Slice, a police officer is talking to a motorcyclist and a man with a truck. I notice some damage in each of their vehicles, so after the officer is done, I go check on the biker. Luckily, everybody is fine. The man in the truck hit the biker’s parked motorcycle while he was inside, so it could have been worse.

After some thorough catching up, it’s getting late. Hollie and the boys head home and I’m off to visit another designer buddy, Lindsay, who I’ve known since we worked together at JHI eons ago.

I enjoy a brief nighttime ride through downtown before ending up at her studio, which is part of this cool gallery/workspace/performance venue space. Since arriving in Austin, Lindsay has focused more on lettering, and has been crushing it. Check out her shop and buy some goodies, people.

Lindsay! She doesn’t care if I like this pic.

I’m finally back at Leeza’s for the night and have the pleasure of meeting & chatting with her and her roommate a while before hopping on the phone with the fam back in VA. They are both extremely nice and fun to talk to. I wish I had more time to hang out with them, but I’ve got to pack up and prepare for tomorrow’s journey. Despite being my second trip out there, Camp Waldemar is remote, so familiarizing myself with the route is a good idea.

Time to call it a night.