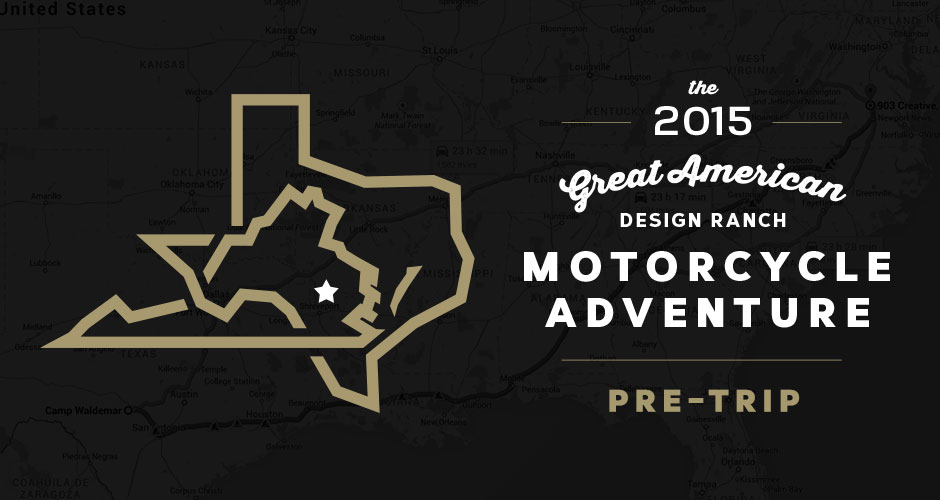 In 2013, I rode my motorcycle from South Hill, VA to Hunt, TX to attend my third Design Ranch, held by AIGA Austin. There were ups. There were downs. Lessons were learned. Friendships were made. I had the best intentions of chronicling that trip, but never delivered. Well, a few weeks ago I did it all over again.

I was originally going to recap the entire trip in a single post. However, I quickly realized that it would be way too much for somebody to read in one shot, so I’ve decided to break the posts up by day.

It seems logical to give some background on the actual event around which this entire adventure takes place. I say “event” because despite being occasionally described and promoted as a conference, it’s unlike any conference I’ve ever attended.

Sometime during the autumn of 2008 my friend and former co-worker Maya was persuaded to volunteer at Design Ranch by her friend and fellow designer Grace. Maya in turn convinced me to attend.

Grace’s promise of a unique conference experience turned out to be right on the money. I fell in love with just about every aspect of the Ranch:

I haven’t missed one since, and each experience is better than the last. I’ve also been lucky enough to have various fellow RVA design peeps in attendance each time.

Although, I shouldn’t really be singing its praises too loudly. The in-person pre-registration event in Austin for this year’s Design Ranch was apparently bonkers, and the subsequent open online registration sold out in 4 minutes. Four. Minutes.

I’m worried that my days as a lucky out-of-state attendee may be numbered.

At Design Ranch the typical ice breaker (for me at least) is some variation of “You from Austin?” / “Where are you from?” / “Where’s your office?”

If they’re from Austin, the follow up is usually where they were before that, since Austin is full of transplants (not that there’s anything wrong with that).

If they’re from out-of-state, the follow up is usually “Did you fly into San Antonio?” since that’s the typical destination and it’s an easy question to keep the conversation going.

So it caught most people off-guard when I’d say I drove instead of flying. They’d say, “You drove your car all the way here from Virginia?” Which is weird, that most people specifically mentioned the car, but it did happen almost every time.

Then I’d say, “Well, actually, I rode my motorcycle out here.” After a while I found I didn’t need to get that far in the explanation because somebody would usually interject to spill the beans on my mode of transportation for me. I became that guy on his motorcycle. Which was fine, because it somehow seemed braggy to tell people myself. Idunno.

But here’s how I knew I was among my people. More often the response I got was “Wow” instead of “Why?”

But for those wondering why I’d double my travel time in arguably the most dangerous way possible, here’s why:

Exploring Northern Texas on my way to the Ranch in 2013

On the flip side, more travel time means more time away from my amazing, ever-growing family, and that’s tough.

My wife, Amanda, is a saint for being so incredibly cool with this crazy trip. With a little help from her mom, she handled my absence like a champ. She’s the best, you guys.

So there you go. That should be a sufficient setup for the following series of posts.

I’m “hitting the road” tomorrow so check back and see how Day One went.